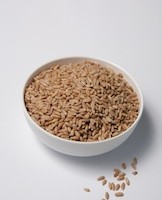 In an oddly modern twist, it appears ancient grains are making a comeback! They are certainly getting a lot of interest in the media, not to mention shelf space in the supermarket. So what exactly are ancient grains and  should we eat them?

To be classified as a grain, the plant must be from the Poaceae family of plants. This includes wheat, oats, rice, corn, barley, sorghum, rye and millet. Other plants that are often referred to as grains include amaranth, buckwheat and quinoa. However, although they are nutritionally similar and used in similar ways, they aren’t from the Poaceae family of plants, so they aren’t officially grains.

How about the ancient ones?

The term ‘ancient grains’ refers to grains that have been grown by different communities for centuries. They have often been forgotten by the commercialised west who favour modern wheats that grow faster, yield more and are easier to process. Ancient grains include ancient forms of wheat (such as spelt, farro and Kamut), amaranth, buckwheat (not a type of wheat), millet, quinoa, sorghum and wild rice.

Ancient grains and products made from them are now becoming more popular. They are increasingly being used in the manufacture of niche breads, pasta, breakfast cereals and snack bars, as well as on their own as alternatives to rice and pasta.  As well as offering grain alternatives for those eating wheat or gluten free, ancient grains offer nutritional benefits.

Ancient grains are often less refined than modern processed grains so you get the nutritional benefits of the whole grain, including increased fibre. Some ancient grains are good sources of specific nutrients, for example barley is a good source of selenium, spelt is high in manganese, oats have lots of thiamin. However, this depends on many factors including soil conditions. Many ancient grains are also grown organically which is beneficial for the environment.

The Grains and Legumes Nutrition Council are the independent authority on the nutrition and health benefits of grains and legumes.

Catherine Saxelby, accredited nutritionist and author, has written a book all about ancient grains for those of you who’d like to know more on the subject.