Coconuts – all you need to know! 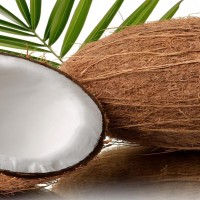 Although it’s called a coco-NUT, a coconut is not a nut at all. It is botanically classified as a drupe. A drupe is usually a fleshy fruit with thin skin and a central stone (think plum, nectarine or apricot), but coconuts, almonds and pistachios are classified as drupes, too. The word coconut comes from the Portuguese and Spanish word coco, meaning “grinning face” as the three indentations were thought to resemble the grinning face of a monkey.

Many people confuse coconut milk and coconut water. Coconut milk comes from the flesh of the coconut and is made by grating the coconut flesh, then mixing it with a small amount of water to dissolve the coconut’s whitish fatty content. It has a high kilojoule (energy) content and most of the kilojoules are derived from fat, approximately 95% of which is saturated fat, the type that contributes to high cholesterol and heart disease.

Coconut water, on the other hand, is actually the juice of the coconut and it’s a thin watery liquid from inside a young coconut. Coconut water is much lower in kilojoules than coconut milk at around 190 kJ per cup compared to coconut milk, which contains about 2300 kJ per cup! Coconut water has become very popular in recent years as the new ‘health drink’ and it’s marketed as a natural alternative to a sports drinks as it’s high in potassium and thought to rehydrate the body more effectively than water.

However, although coconut water does contain sodium and potassium, (two electrolytes that are lost in sweat), the amount present is quite small. (In fact you probably get more by eating a healthy diet full of fruit and vegetables.) It’s important to keep in mind that most of us don’t sweat enough through exercise to require rehydrating with anything other than water. Sports drinks are only necessary when adults or children exercise intensely for more than 90 minutes at a time, and even then water should be the main source of rehydration. For more information on the preferred fluid for rehydration after exercise click here.

If you do enjoy coconut water – don’t let the marketing fool you! It’s best to think of it as juice rather than water. Not only does coconut water contain kilojoules from sugar naturally present in the coconut, but some commercial brands of coconut water have added sugar, too. So, if you’re going to drink it, try to choose one that has less than 5g of sugar per 100ml.

Is coconut milk good for you?

Given the growing popularity of everything coconut, it’s no surprise that coconut milk has started to emerge as a replacement for dairy milk or dairy alternatives such as soy milk. Regular coconut milk contains approximately six times the kilojoule content of skim milk, so it’s not a suitable alternative for everyday use. Plus, it’s high in saturated fat, so if you’re watching your weight or have a history of heart disease or elevated cholesterol, you should limit your intake.

More and more brands of ‘coconut milk for drinking’ are starting to appear in the supermarket. These products are mostly water and have a very low protein content, so they won’t provide the same nutrients as dairy milk or other milk alternatives such as soy milk. Plus, coconuts don’t naturally contain calcium, one of the most important nutrients in dairy foods. If you do choose to replace milk with coconut milk, it’s a good idea to choose one that has been fortified with calcium to ensure your bones stay strong.

Is coconut a ‘superfood’?

There are many claims made about the health benefits of coconut in its various forms (water, milk, oil, etc). These include that it can boost your metabolism, promote weight loss and cure disease. However, as of yet there is no evidence to support these claims. While it’s fine to consume coconut products such as coconut milk, cream and oil occasionally, it’s recommended that they are only consumed in moderation due to their high saturated fat content.

As always, good health means not focusing on any one particular food as the secret, but rather on an overall healthy diet which includes plenty of fruit, vegetables, whole grains, lean protein and reduced fat dairy or alternatives.