Is it safe to eat if I cut off mould? 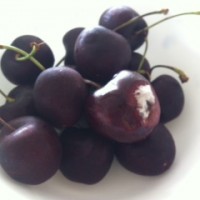 For me it’s the jar of pesto that I opened a while back and now I want to use it as an easy way to add flavour to tonight’s plain pasta. But there’s a tiny spot of mould on top? Can I scoop it out and use it anyway? Is it still safe to eat?

What about fruit that is just a little squishy with a small furry spot? Can I cut that peach in half and eat the “good” half? Some people will throw out food at the slightest sign of  mush, slime or discolouration. While others happily chop off the mould and continue to eat. But what’s safe?

This week the CSIRO released a report to help us identify which foods are OK to consume after cutting off the moudly bits and which food should be thrown out. Whilst mould is used in production of some foods (e.g. to ripen cheeses) and to produce some medicines (e.g. penicillin), it’s safe to assume that all mould that grows on food when it wasn’t expected is unsafe to eat.

The basic rule for determining whether a food can be saved is to think about it’s moisture content and how porous it is. Foods with a high moisture content such as cooked casseroles, soft fruit and vegetables, pastes/sauces (there goes my pesto!) and soft cheeses; and porous foods, such as bread and cakes, can’t be saved after mould has started to grow. They should all be thrown away.

On the flip side, foods with a denser structure, such as hard cheddar, can be safely consumed after the visible mould PLUS a depth of 1 to 2 cm has been cut off. Moulds have invisible networks of cells that extend into the food they are growing on, hence the requirement to cut off an additional 1 to 2cm past the mould that can be seen.

Mould cells by themselves are too small for us to see. It’s not until they multiply and form big networks that we can begin to see the mould. Alongside the mould we can see, there is always an invisible, microscopic network penetrating into the food that we can’t see. It’s in these networks that toxins are released that can make us unwell. The toxins may make you immediately sick, or more worryingly, it can take time to notice.

So, next time you ponder that furry spot on a tomato, think about its moisture content, be safe and throw it out!