Fat versus sugar: game on! 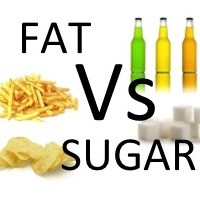 The media loves a fight (remember Packer Vs Gyngell?) and it seems there are two new enemies in town: Fat Vs Sugar. Who’s the biggest villain? The conflicting newspaper headlines, magazine articles and studies make it difficult to know what to believe and, more importantly, virtually impossible to work out what we should be eating (or not).

To add further confusion, the majority of food labels now have some sort of health claim, making the supermarket a minefield of contradiction and confusion. There is so much choice on offer and so many nutrition claims being made, that trying to buy something as simple as a healthy yoghurt or snack bar seems overwhelming. Should you choose the low fat option? What about no added sugar? Not to mention the fat-free, low in saturated fat, no cane sugar, no added sodium, gluten-free or lactose-free options!

In the last few decades, fat, particularly saturated fat, has been demonised as the biggest culprit in the increasing prevalence of overweight and obesity. This makes sense from a purely mathematical point of view as fat contains 37kJ per gram, compared to carbohydrate (which is sugar) and protein that contain less than half of that at only 16kJ per gram. However, as low-fat diets became popular and low-fat or reduced-fat foods took over supermarket shelves, the problem just got bigger and we grew larger. So, in recent years, the finger has been pointed away from saturated fat and firmly at sugar (more specifically, added sugars).

However, choosing to blame one nutrient over another is simplifying the issue and missing the point. The truth is that both saturated fat and added sugar will cause weight gain and are bad for your health if eaten in excess. The main reason we are eating these nutrients in excess is due to the overconsumption of processed foods that contain large amounts of both added sugar and saturated fat.

The 2011-2012 National Nutrition and Physical Activity Survey found that just over one-third (35%) of total energy (kilojoules) consumed was from ‘discretionary foods’, that’s food that is considered to be of little nutritional value and that tends to be high in saturated fat, sugar and salt! In fact, a whopping 41% of 14 to18 year olds filled a third of their diets with these foods. The foods contributing most of the energy in this category were cakes, muffins, scones, confectionery, snack bars, pastries, sweet and savoury biscuits and sugar sweetened beverages….all processed foods high in saturated fat and/or added sugar (1).

So, instead of blaming just one nutrient for the rising rates of overweight and obesity, we think it’s smarter to focus on having a balanced overall diet. Avoiding one nutrient doesn’t mean you’re choosing healthy options.

So, what should we eat?

We advise sticking to a balanced food plan and across your week eating foods from the five core food groups – fruit, vegetables, whole grains, low-fat dairy and lean protein – and limiting those non-core food snacks. Follow the serves recommended in the Australian Dietary Guidelines, (which leave little room for processed foods that are high in saturated fat and added sugar) and you’ll be well on your way to a healthy diet and hopefully a slimmer waistline. By focusing more on what to include in your family’s diet rather than what to exclude, suddenly the supermarket shop is a lot more straightforward.

We know our advice might not make a great newspaper headline (Fat Vs Sugar: Fight Postponed!) or sell magazines but it works…and it leaves everyone a lot less confused.