A guide to establishing healthy food habits at home 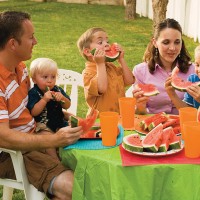 There’s always a lot of attention given to what children should eat and less about the way they eat. The early years are vital for the physical development of a child and they are equally important for establishing a healthy relationship with food.

So, what does this mean exactly? The attitudes and food-practices of parents shape the home environment, which in turn affect a child’s approach to eating. Everyday decisions such as serving up individual portions, eating in front of the television, or using food as a reward for good behavior, can shape long-lasting food-habits that kids take with them into adulthood.

Studies have been carried out that focus on the associations between the feeding practices of parents and young children and adolescent weight status.1,2 Practicing food restriction (“no cookies allowed”), food monitoring (the overt or covert control of kids’ food consumption) or pressure to eat (“clear the plate”), can be detrimental.

Your approach to monitoring what your child eats effects their food habits.2 In a study of families that used an open restriction method (when junk/‘occasional’ food is kept in the house and the child is aware that it is not for everyday consumption),the end result was a child that consumed  more healthy snacks. A more sneaky or closed form of restriction (where junk food is not allowed or is banned in the house) meant the children didn’t eat unhealthy snacks (because they weren’t available), but they also did not increase their intake of healthy snacks. This shows that being open and talking with your child about food and how it fits within a balanced diet is more beneficial than banning foods altogether.

It’s equally important to nourish a sense of balance when it comes to food. Don’t feel guilty about allowing yourself or your child an “occasional” snack or dessert. They will pick up on any guilt associated with food consumption and it’s not healthy. Instead, encourage your child to enjoy every bite while they’re indulging in an occasional food. In fact, children who are allowed to have treats from time to time potentially have a healthier relationship with food than those who are deprived, because they learn moderation and balance at an early age.

Eating until the plate is clean is an example of enforcing food habits that are based on external (also known as ‘environmental’) cues that can lead to eating in the absence of hunger and result in weight gain. Instead, emphasis should be given to a child’s innate sense of satiety.3,4 For instance, simply asking “are you full?” rather than “are you finished?” brings the child’s attention to how they feel, not how the plate looks.

Dinner is an undervalued chance to establish meaningful communication and healthy habits in the family, and for this reason has been the focus of recent research. In fact, the ritual of where one eats – specifically, the kitchen or dining room5  – and how much time is dedicated to eating seems to be the largest driver of an individual’s body mass index (BMI). Try eating together as a family, around a table as often as possible.

A lot of parents dish up the meal in the kitchen before putting the plates on the table because it’s less messy and it cancels out any food-fuss that might otherwise occur. There are positives when it comes to allowing your kids to serve their own portions as it allows them to learn how much they eat and express their food preferences. One study focused on 2-5 year olds in more than 100 US childcare centres found that children who serve themselves eat less and are therefore less overweight. These results have been controversial but it is always beneficial for children to express autonomy within clear and consistent boundaries.

It’s important to regularly introduce new fruit and veggies to your children, especially at times when you know they’re hungry. Draw attention to the colour of the food and even its origin, as this will make it exciting. If you rely on camouflage tactics because your child is a fussy-eater and suffers from ‘veggieitis‘, try serving the disguised vegetable in its whole form on the side. As a parent it is important to persevere, as children need to be exposed at least ten times in a short period of time before they become familiar with a new food.

Parenting styles and feeding practices have a huge influence on children’s dietary behaviours and food preferences. When it comes to snack time, for instance, engage your child in a conversation about healthy snacks and then give them a choice within this boundary. For instance, ‘would you like a banana or grapes?’ Children should also see you modeling the behaviour that you are promoting, so make sure your child sees you eating a piece of fruit or veggie sticks and enjoy it together.

When parents model healthy food-practices and engage their children in open, responsive communication, the majority of them are capable of learning how to self-regulate their food choices that will develop with them into adulthood.