Watch out for ‘Occasional’ foods in the health food aisle 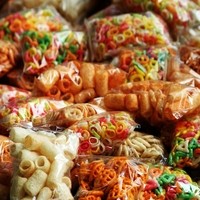 As well as helping school canteens to deliver healthier lunch and recess options every day, Healthy Kids categorises food and drink into ‘Everyday’/’Occasional’ or ‘GREEN’, ‘AMBER’ and ‘RED’ products. You may have heard these terms at your kid’s school canteen or seen them on its menu.

Everyday foods are those made from foods in the five food groups. Occasional foods and drinks are mostly high in saturated fat, sugars and/or salt and often with little nutritional value.

GREEN is an everyday food, AMBER is a ‘sometimes’ food and RED should be avoided or strictly limited.

A lot of the food and drink found in canteens is also sold in local supermarkets. And while canteens have the benefit of their state/territory food and drink guidelines to help keep their menus on track, parents are often at the mercy of targeted marketing and attractive supermarket displays, which makes it easier to unwittingly choose unhealthy snacks.

Healthy Kids has noticed that the supposed ‘health food’ aisles in some supermarkets include RED or ‘should not be sold’ Occasional items, which can be very misleading for parents.

While the AMBER food category is about give and take, there are some foods in the health aisle that are downright RED.

Below is a list of food and drink to watch out for as you head down this aisle, plus a few suggested replacements to help you make a better choice:

The flavour of liquorice comes from a plant, but liquorice in packets is confectionery because it mainly contains sugar. Replace sugar-laden liquorice logs with a small box of sultanas, and get that liquorice flavour from a fennel salad or liquorice tea.

They may be ‘baked not fried’, however pretzels are still an Occasional/AMBER salty snack. Instead, look for savoury snacks that are made from a high percentage of whole grains and serve them with a hommus, veggie or yoghurt-based dip. If you’re still after a bit of crunch, you could also try a handful of unsalted nuts.

They look healthy, but they’re not. Yoghurt frogs are a RED or ‘should not be sold’ Occasional food because they contain mostly palm oil and sugar. They should be avoided entirely. Replace these with a tub of fruit yoghurt for a sweet snack that also builds bones.

If you look in the ingredients list of these snacks you will see mostly fruit juice concentrate – another name for sugar. These types of products are basically confectionery. A few dried apricots, dates, raisins or sultanas are a better choice for a sweet high fibre snack.

In some of these snack bags you can actually see the sugar on the outside – obviously a no-go area. Even the large bags containing handy, snack-sized packets can blow out your child’s daily recommended sugar intake.

These are mostly Occasional or AMBER/RED. They are often purely puffed rice with a sweet coating and not very nutritious. Look for snack bars where the main ingredients are oats, dried fruit, nuts and seeds with only a small amount of added sugar.

The added sugar has been taken out, however these products are still high in energy with around 40% fat content. They don’t provide much in the way of nutritious ingredients. Try a small serve of hot chocolate made with reduced fat milk.

Just because a product is ‘natural’ or ‘organic’, this does not mean it’s a healthier option. Organic chocolate still has just as much energy, saturated fat and sugar as regular chocolate and should only be eaten occasionally.

If you need a little extra help in choosing healthier snacks and food and drink in general, Healthy Kids has a few cheat sheets to guide you. There is advice on choosing vegetables, fruit, breads and cereals, dairy, and meat, fish, poultry and alternatives.

Food labels can also be difficult to decipher: www.eatforhealth.gov.au has a fantastic (and printable) cheat sheet to keep at hand when you’re at the supermarket.